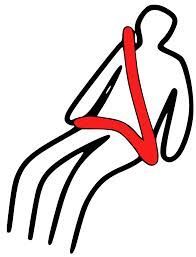 Are you wearing a seatbelt?

The joint police forces of Norfolk and Suffolk are stopping drivers and checking that seatbelts are worn.  If you're caught not wearing one, a fixed fine of £100 wil be issued.

Police will be carrying out checks as part of the Europe-wide TISPOL seatbelt enforcement initiative  (8-14 September).

The aim is to raise awareness of how many collision-related injuries and fatalities can be prevented by the wearing of seatbelts, which is now compulsory in most European countries.

When we were little in the 1970's seat belt wearing wasn't compulsory and it only became law on 31st January 1983 and it was retained permanently in 1986.

In 1989 it became compulsory for children to wear seatbelts and in 1991 for rear passengers to wear them too.