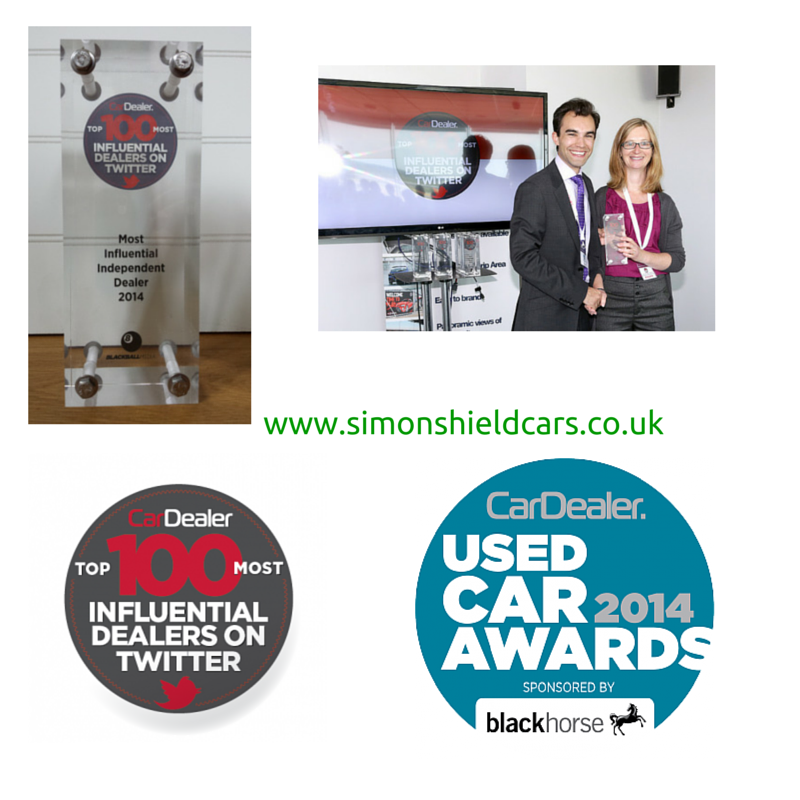 Have you got the red carpet ready?

Awards time of year and Simon Shield Cars has been nominated for....

Social Media User of the year

Earlier this year, June to be exact, Caroline received the award for being the "Most influential independent dealer on Twitter 2014" from Car Dealer Magazine.  Car Dealer magazine used the Klout scoring system to collate the list.  The updated list has just been released and we're now sitting at number 12.  Suddenly the dealers have all woken up to Twitter and Klout scores are rising.

The award ceremony is taking place on Monday 1st December at The Brewery, London.

Press release has just gone out:

Power under the hood

Caroline has been shortlisted for Car Dealer Magazine’s Social Media User of the Year, showing that even if you own a smaller business you can have a massive influence nationwide.

Caroline uses twitter and blogging to promote the family business Simon Shield Cars Ltd, an independent second hand car dealership based in Great Bricett near Ipswich. She started two years ago and this is the second time she has been nominated for an award. The first time Caroline won the Car Dealer magazine’s most influential independent dealer on Twitter 2014.

“Being nominated for awards such as this means a great deal to us as we are only a small outfit compared to others, we have no big social media or press budget and I am the only one making it happen!  It can get quite manic fitting it all in between book keeping, dealing with customers face-to-face, looking after the family and the dog. It all happens during school hours and after dark but I just love it!

“It is a great way for raising your business profile, making new contacts and getting new and bolstering repeat business.”

Caroline is ranked within the Top 20 of the Top 100 Most Influential Car Dealers on Twitter. You can follow her on twitter @simonshieldcars or catch up with her blog http://femaleusedcarexpert.blogspot.com or indeed check out the family business website: www.simonshieldcars.co.uk

The Car dealer used Car Awards 2014 are being held in London on Monday 1 December. Caroline is up against

Keep your fingers crossed for us.

07-06-2021 Caroline started #volunteering at the local vaccination centre based at The Mix,…
Read more >